Stem- Vinyl- and Streamingmastering in the Mastering Studio / Mixing Studio

Exchanging of sounds and instruments, arranging of your project and creation of beats.

Learn mixing and mastering. We will help you to eliminate your deficits! Online as well as directly in the studio:

Free mixing and mastering tips to read or download as pdf.

Peak-Studios is your competent partner when it comes to audio mastering, respectively stem mastering, vinyl mastering and streaming mastering, as well as mixing. We will also happily handle the preparation for duplication at a CD manufacturer (with a master CD or a DDP-Master) as well as digital distributioners like iTunes, YouTube, Spotify and Amazon! If your song is not yet ready for an audio mastering, we can do the finishing touches in our online mixing studio.

“Peak-Studios – One of the best addresses in Germany!” 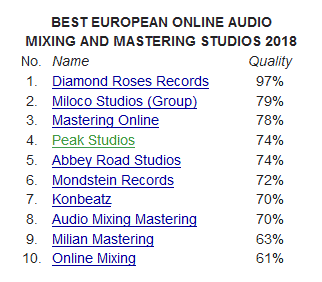 How Does Mastering Work?

In the mastering process, the engineer usually receives a stereo file that he drags into his DAW (digital audio workstation) to have an overview of the technical and musical condition of the song. They do that with the help of analysis tools, metering and their listening skills. Afterwards, the file is processed with different processors, such as compressor, EQ, deesser or other hardware and software. The goal here is to process the file in a way that the audio material is having an as balanced as possible frequency response. Errors like digital clicks, unwanted noise or overcompression can be reduced or be eliminated completely during this process. Subsequently, the audio material is converted into the desired output format. Usually that is 16 bit wave with a 44.1 khz sample rate. We will tell you how mastering works exactly in our mastering blog.

Stem Mastering (subgroup mastering) is the mastering of tracks that are combined to so called subgroups. For example vocals, guitars, drums, strings. Here, the mastering engineer’s influence regarding volume, loudness, dynamics and sound is much bigger than in usual stereo mastering.

Vinyl is getting more and more popular again and so the vinyl mastering is coming back as well. During the vinyl mastering, areas like the deep bass area and the high tone area are to be handled critically and carefully. The distribution of songs on a vinyl record is also to be done carefully because otherwise it might come to a substantially loss in quality.

DDP (disc description protocol) is a digital submission form of the audio files to the manufacturer. Through the creation of a DDP-master, mistakes during the copying process of the CD are avoided. In the past, master CDs had often been written by bad disc drives or were even put into a home stereo for playback. Those “bad lasers” caused tiny scratches on the master CD, which then led to partially vast errors during manufacturing. This does not happen with a DDP-master.

With the help of special software, we are able to create a DDP-master for you, that you can give to the manufacturer without any doubts. The DDP-master consists of a checksum and a CD-text amongst others. The CD-text can show the interpreter, title, composer, writer and more information like EAN-code and ISRC-code